"There is geometry in the humming of the strings, there is music in the spacing of the spheres." — Pythagoras

​Pythagoras was the one who connected the numbers with music, he showed that the harmony of two sounds played together simultaneously, could be explained mathematically. It is said that this brilliant idea came to his mind when he heard some harmonious and disharmonious sounds coming from a blacksmith hammers.
Notes X 2
When you double the frequency of a note, something very interesting happens, the frequency doubled seems the same sound as the original note, but higher, while each other sound quite differently.

Frequencies and octaves according to the modern scale

Based on this Fork A440, frequencies are not integers
In music, an octave (Latin Octavus: eighth) is the interval between one musical pitch and another whose frequency is doubled.

Scale based on 440Hz
Since the 20th century, most of the forks have a 440Hz frequency reference. This choice gives a frequency scale (Hz) which is not composed of whole numbers, for example:

Scale based on 432Hz
We find much more beautiful symmetries in the numbers if we use the former more traditional system based on 432Hz. It become possible to imagine a scale which exploits mathMagics properties of the number 9 as seen in the following harmonic series to 9 Hz 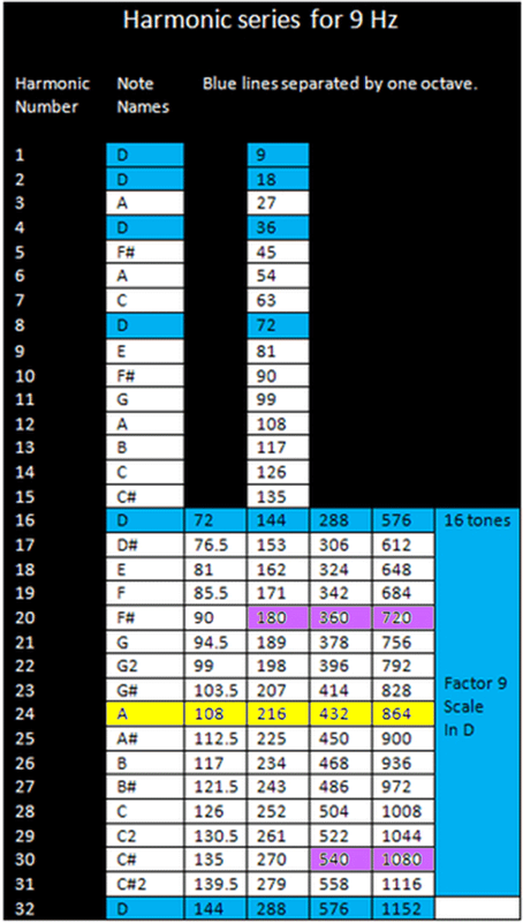 Mathmagic scale of frequencies based on 9 and 432. mathemagicalmusic.weebly.com.
Regular polygons and integers

​This scale is not only interesting because it is mostly composed of integers, but also because we find in it numbers like 180 360 540 720 900 1080, which are the sums of the angles of the regulars polygons: Triangle, square, circle, pentagon, hexagon, heptagon and octogon. This coincidence is linked with the mathmagic property of the number 9 and the system 360 as you can see in this video